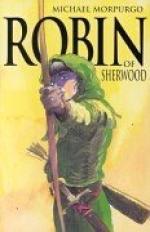 Most of the novel is set in Sherwood Forest and the nearby city of Nottingham, England, the traditional haunts of Robin Hood and his nemesis, the Sheriff. The time is during King Richard II's reign, the years 1189 to 1199 A.D.

Sherwood, like the other great forest parks which dotted medieval England, was the property of the crown. It was also a multiple-use nature preserve. These facts led to frequent clashes of interests.

The forest was a rich resource for them, with its wood for fuel, building and weapon making, game for food, and herbs and plants for healing. For those willing to learn the forest's paths and signs it was also a place of refuge. From the Sheriff's perspective, however, these were outrageous uses of Sherwood Forest. Even if the Sheriff had not been corrupt and cruel, he was sworn to...