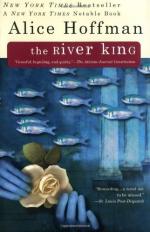 Related Topics
The Museum of Extraordinary Things
The Dovekeepers
The Marriage of Opposites
Faithful: A Novel
The Rules of Magic
The World That We Knew
The Book of Magic

Books Like The River King by Alice Hoffman | Suggested Reading

Alice Hoffman
This Study Guide consists of approximately 20 pages of chapter summaries, quotes, character analysis, themes, and more - everything you need to sharpen your knowledge of The River King.

No other of Hoffman's books is related to The River King. However, many of them take on similar themes involving magic and gothic elements. Alice Hoffman has published a total of thirteen novels, one book of short fiction, and three books for children.

Hoffman's first novel, Property Of (1982), was written at the age of twenty-one, while she was studying at Stanford, and published shortly thereafter by Farrar Straus and Giroux. It tells the story of a lonely outsider who wants desperately to belong.

As she determinedly tries to become the "property of" a local gang's brooding leader, she deals with the power of gang mentality and the problems of loving someone who claims to be indifferent toward emotional love.

Hoffman's work has been published in more than twenty translations and more than one hundred foreign editions. Her novels have received mention as notable books of the...

More summaries and resources for teaching or studying The River King.

The River King from Gale. ©2005-2006 Thomson Gale, a part of the Thomson Corporation. All rights reserved.