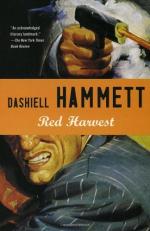 Dashiell Hammett
This Study Guide consists of approximately 10 pages of chapter summaries, quotes, character analysis, themes, and more - everything you need to sharpen your knowledge of Red Harvest.

Red Harvest is an excellent example of the differences in technique between the classic and the hard-boiled detective novel. Whereas the former uses murder and detection as the ingredients for a game, playfully set against the background of a basically healthy, perfectly ordered society, the hardboiled detective novel treats crime as symptomatic of a troubled American society. The work of the Op, then, is not the pretense for an intellectual contest between the detective and the reader, but it is an heroic attempt to preserve a measure of dignity and morals in an otherwise corrupt world.

In Red Harvest, the answer to the question of who killed Donald Wilsson is quite secondary to the portrayal of a decayed moral landscape, in which the last somewhat decent human being must make his stand and choose his defense.

The first-person narrative of a nameless narrator emphasizes this approach.

More summaries and resources for teaching or studying Red Harvest.

Red Harvest from Gale. ©2005-2006 Thomson Gale, a part of the Thomson Corporation. All rights reserved.