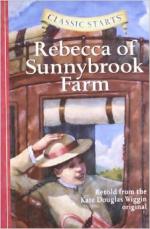 Kate Douglas Wiggin
This Study Guide consists of approximately 9 pages of chapter summaries, quotes, character analysis, themes, and more - everything you need to sharpen your knowledge of Rebecca of Sunnybrook Farm.

Although the Sawyers are relatively affluent, they consistently demonstrate an egalitarian attitude. Unlike the Smellie family, for example, the Sawyers never flaunt their wealth, nor are they condescending toward neighbors who have less. Both Rebecca and her wealthy friend Emma Jane associate as equals with the impoverished Simpsons, and Rebecca becomes extremely angry when Minnie Smellie taunts the Simpson children because their father is in jail.

Rebecca insists that the children should not be treated as thieves just because their father has been convicted of dealing in stolen property.

Furthermore, Rebecca demonstrates hospitality when she volunteers to entertain the foreign missionaries. Wiggin also notes that Rebecca hates gossip and refuses to listen to tales about others. In contrast, Minnie Smellie is condemned not only for her cruelty to those less fortunate, but also for her selfishness.

More summaries and resources for teaching or studying Rebecca of Sunnybrook Farm.

Rebecca of Sunnybrook Farm from Gale. ©2005-2006 Thomson Gale, a part of the Thomson Corporation. All rights reserved.