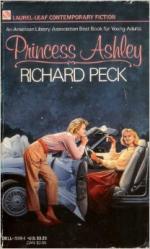 Richard Peck
This Study Guide consists of approximately 10 pages of chapter summaries, quotes, character analysis, themes, and more - everything you need to sharpen your knowledge of Princess Ashley.

1. Chelsea feels a strong competition with her mother. Why? In what ways does she compete? Is this a normal mother-daughter relationship?

3. Describe Chelsea's relationship with Ashley. What was Chelsea's first impression of Ashley? How did their friendship develop?

5. When Chelsea's mom is in the hospital, Chelsea turns to her dad for support and finds that she is really in charge now. How did Chelsea feel when she discovered his weakness?

What sort of relationship did they have?

6. Contrast Gloria Raymond's rebellion and her control of her mother with...

More summaries and resources for teaching or studying Princess Ashley.

Princess Ashley from Gale. ©2005-2006 Thomson Gale, a part of the Thomson Corporation. All rights reserved.