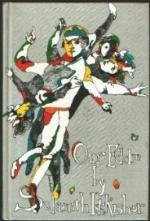 Get Our Eddie from Amazon.com
View the Study Pack
Short Guide
Order our Our Eddie Short Guide

Sulamith Ish-kishor
This Study Guide consists of approximately 9 pages of chapter summaries, quotes, character analysis, themes, and more - everything you need to sharpen your knowledge of Our Eddie.

The story begins in a section of northeast London, where rather small, inexpensive homes sit close together and look exactly alike. Mr. Raphel fails to obtain moral and economic support for teaching Judaism to poor and immigrant children, and his professional relationships with colleagues and potential donors deteriorate because of his increasing mental problems. He returns to New York, the city to which he and his wife had emigrated from Russia several years earlier. Most of the narrative takes place in the Bronx, where Mr. Raphel's wife and four children join him in a dingy, unpleasant apartment after enduring a difficult passage in the steerage section of a ship.

The book covers a three-year period that begins shortly after World War II.

More summaries and resources for teaching or studying Our Eddie.

Our Eddie from Gale. ©2005-2006 Thomson Gale, a part of the Thomson Corporation. All rights reserved.