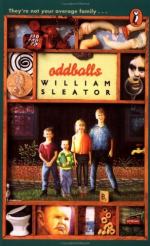 William Sleator
This Study Guide consists of approximately 14 pages of chapter summaries, quotes, character analysis, themes, and more - everything you need to sharpen your knowledge of Oddballs.

William Warner Sleator III says that he began writing when very young and that even then he was interested in the weird aspects of life.

Sleator was raised among a family of scientists but was always interested in the arts, eventually becoming a pianist, composer, and writer. He read science fiction avidly in his early years, possibly spurred in that direction by his dual interests in art and science. He was born to William Warner, Jr., a college professor in physiology, and Esther Kaplan Sleator, a pediatrician, in Havre de Grace, Maryland, on February 13, 1945.

By the time he reached high school, he was composing music with titles such as "Guillotines in Springtime" that reflected his preoccupation with the macabre. He entered Harvard as a music major where he says that he was miserable; his unhappiness manifested itself in unhappy compositions.

More summaries and resources for teaching or studying Oddballs.

Oddballs from Gale. ©2005-2006 Thomson Gale, a part of the Thomson Corporation. All rights reserved.