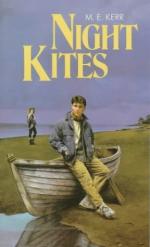 "Night kites are different. They don't think about the dark. They go up alone, on their own, and they're not afraid to be different."

One of Kerr's many trademarks is that she gives no easy answers to the intricate problems in the lives of her characters, nor does she offer any lulling conclusions. Seventeen-year-old Erick Rudd should be in the prime of his life: He is a senior in high school; he is going steady with his long-time girlfriend; his best friend has a new girlfriend that he really likes; and he has a good relationship with his parents and his older brother. Suddenly, Erick's life is not what he thought it was or what he wants it to be.

Erick's life starts to fall apart shortly after he meets Nicki Marr, his best friend's girl. He is attracted to her, she excites him in a way that...

More summaries and resources for teaching or studying Night Kites.

Night Kites from Gale. ©2005-2006 Thomson Gale, a part of the Thomson Corporation. All rights reserved.