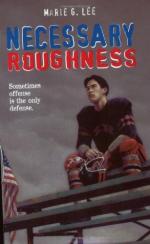 Marie G. Lee
This Study Guide consists of approximately 13 pages of chapter summaries, quotes, character analysis, themes, and more - everything you need to sharpen your knowledge of Necessary Roughness.

Lee deals with the racism in a sensitive way without shying away from its reality.

Chan and Young have grown up as an accepted part of their multicultural neighborhood in Los Angeles. The same cannot be said of Iron Falls. For example, an apartment manager insults Chan's well-educated father by saying, "I can't understand a freakin word you said." The gritty realism of the novel is furthered when the manager refuses to let them rent an apartment. As they leave the man yells, "And stay out, chinks!"

Lee is at her strongest when writing about the prejudice and Chan's classic confrontational relationship with his father.

Young adult readers will be able to identify with Chan's struggle to live within his family's expectations while trying to discover his own identity.

More summaries and resources for teaching or studying Necessary Roughness.

Necessary Roughness from Gale. ©2005-2006 Thomson Gale, a part of the Thomson Corporation. All rights reserved.