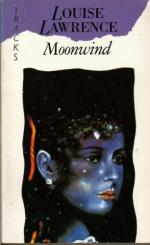 This novel takes place on the moon.

It is approximately one hundred years after the first space flights and lunar landings, which would make the year sometime around A.D. 2060 to 2070.

Both Americans and Russians have established large, permanent moon bases by this time. There are also smaller, widely scattered research stations operating as offshoots of these bases.

Despite this future setting, the humans seem to have jumped to the moon straight from the 1980s. America is still trying to maintain an uneasy truce with Russia (although the superseded term "Soviet" appears twice in the text). At one point Gareth, the young hero, even dials up computer diagrams of a subsurface nuclear silo which the Americans are covertly maintaining.

"California girls" still pop bubble gum and chatter about beach outings andDaddy's corporation. Perhaps this allows young readers to better concentrate on the characters and events, without dealing with...