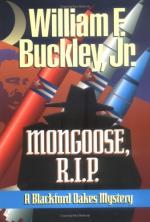 Although the novel Mongoose R.I.P.

is concerned with saving the world from Communist aggression, it also focuses on the illegal and self-defeating actions of the United States.

Buckley is certain that American intelligence agencies, under the direction of then President John F. Kennedy and his brother Attorney General Robert F. Kennedy, made several attempts on the life of Cuban Premier Fidel Castro. Buckley has titled his novel after the code name for this operation: Mongoose. Buckley's novel emphasizes, however, the fact that the absolute denial of human rights by Cuba's totalitarian government under Fidel Castro and the Soviet Union's brutality toward its own citizens are far worse than any misdeeds committed by the United States.

Buckley is also concerned with the threat of nuclear war and the danger posed by a Communist dictatorship so close to our shores. He effectively demonstrates how...