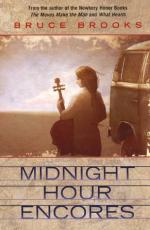 Bruce Brooks
This Study Guide consists of approximately 17 pages of chapter summaries, quotes, character analysis, themes, and more - everything you need to sharpen your knowledge of Midnight Hour Encores.

Midnight Hour Encores, Brooks's second novel, follows Sibilance T. Spooner, world-class cellist, with the cockiness and sarcasm to match, on a crosscountry journey across the United States with her father. She has finally, after sixteen years, asked to meet Connie, the mother she has never known.

The underlying motivation of the trip from Washington, D.C., to San Francisco, however, may be to solve the mystery of the Tartar cellist Dzyga who disappeared from the music world at a young age for daring to displease the Soviet establishment. He may be waiting for her in San Francisco.

To prepare Sib for her meeting with her mother and to try to explain why her mother refused to raise her, Sib's father Taxi (Cabot Spooner) tries to recreate the mood and attitude of her parents' life in the 1960s by finding a VW bus with a soul (and a mind...

Midnight Hour Encores from Gale. ©2005-2006 Thomson Gale, a part of the Thomson Corporation. All rights reserved.