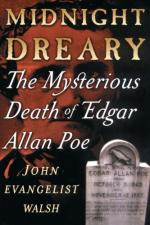 Deas, Michael J. The Portraits and Daguerreotypes of Edgar Allan Poe. Charlottesville, VA: University Press of Virginia, 1989. This is an enjoyable book, full of pictures of Poe. One may find it worthwhile to compare the pictures of Poe late in his life with Walsh's descriptions, especially concerning his moustache.

"Literary deaths." Economist (April 10, 1999): 3. This review says that Walsh goes beyond what a good detective would do, by going beyond the evidence, but still praises Midnight Dreary.

Review of Midnight Dreary. Publishers Weekly (October 19, 1998): 65. "Will [Midnight Dreary] settle the mystery once and for all? Probably not," says...