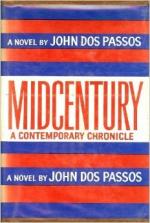 John Dos Passos
This Study Guide consists of approximately 9 pages of chapter summaries, quotes, character analysis, themes, and more - everything you need to sharpen your knowledge of Midcentury.

The narrative methods of Midcentury offer subtle variations on those of the U.S.A. trilogy. Dos Passos blends documentary with narrative sections, and he again uses four main narrative lines.

These intersect when Lomax, the hero of "The Big Office," appears as a supporting character in "The Great Taxicab War," much as Margo Dowling became Charlie Anderson's mistress in The Big Money (1936).

The documentary sections include briefer, and more pointed, variations on the "Newsreel" sections of U.S.A.

These reflect the movement of American journalism to electronic media and often the fragments are somewhat more developed than their earlier counterparts. Also, Dos Passos depends more extensively on the biographical profiles, poetic and judgmental glimpses into the lives of people who shaped history. In Midcentury, there are fourteen profiles, and a character like MacArthur, whom the Dos Passos of the 1930s would probably have satirized as aristocratic...

More summaries and resources for teaching or studying Midcentury.

Midcentury from Gale. ©2005-2006 Thomson Gale, a part of the Thomson Corporation. All rights reserved.