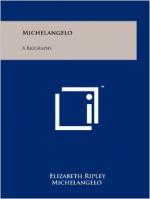 Elizabeth Blake Ripley was born in New Haven, Connecticut, on June 9, 1906. She attended Smith College, spending her junior year studying at the Sorbonne, in Paris, and graduating in 1928 with majors in French and art.

After graduation, Ripley traveled extensively abroad while free-lancing in both writing and theater design. She steeped herself in the famous works of art that eventually became the core of her life's work. During this period she married Kenneth Ripley, but they divorced after six years.

Ripley began illustrating books for Oxford University Press in 1940, while studying at the Art Students League in New York. In 1948 she began a Christmas card business that did well enough to become a permanent vocation. But following the success of Leonardo da Vinci and Michelangelo, she decided to devote herself to a career as a biographer.

Ripley settled in New England, where, in addition to...