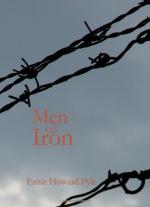 Howard Pyle
This Study Guide consists of approximately 15 pages of chapter summaries, quotes, character analysis, themes, and more - everything you need to sharpen your knowledge of Men of Iron.

The characters in Men of Iron divide into two groups. The novel focuses on those characters belonging to the boyworld, including Myles Falworth and the other squires and bachelors gathered at Devlen Castle to train for knighthood.

The second group of characters consists of those remote adults who regulate castle life and are responsible for training the boys in their charge. These adults operate largely behind the scenes, the boys often remaining puzzled by their actions and motives.

During the course of the novel, however, these two groups gradually converge as Myles and his cohorts mature and gain admittance into the adult-world. At the end of the novel, Myles recognizes how the adults surrounding him have been watchful and concerned while allowing him repeated opportunities to prove himself and to grow in mind, spirit, and body.

Myles Falworth, the central character in the novel...

More summaries and resources for teaching or studying Men of Iron.

Men of Iron from Gale. ©2005-2006 Thomson Gale, a part of the Thomson Corporation. All rights reserved.