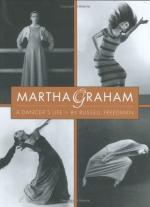 Freedman draws on nearly forty references to construct his portrait of Martha Graham. The details he uses from these sources create an intricate picture of Graham's life. Freedman's descriptions of Graham as a child quickly allow young readers to identify with her. What little girl has not played dress up with her mother's "junk jewelry" or made a theater curtain with a bed sheet like Graham did?

Likewise, Freedman's attention to minutiae captures the world around Graham.

The Victorian era of Graham's childhood is perfectly explained by Freedman's comment that little girls were expected to wear "spotless white gloves when they went to church."

His use of quotations from critics, admirers, friends, lovers, and even Graham herself creates an immediacy that also draws both the young adult or mature reader into Graham's life, into her rehearsal studio, and on to the performance stage. Dancing in "Frontier...