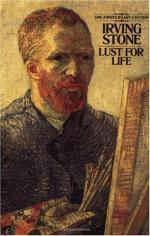 Literary Precedents for Lust for Life

Irving Stone
This Study Guide consists of approximately 4 pages of chapter summaries, quotes, character analysis, themes, and more - everything you need to sharpen your knowledge of Lust for Life.

Many critics believe Lust for Life was the first of a new genre, the bio-history novel. This is, perhaps, the reason why several reviewers reacted so severely to it. The offspring of such literary works as Boswell's biography of Samuel Johnson and Claudius' history writings of Rome before the fall, it is also related to such narratives that began with Daniel Defoe and Laurence Stern in the eighteenth century. Like James Michener, a contemporary historical novelist, Stone compiles and translates years of data and research into novels, but he is a biographer first; he concentrates on the person. Michener is a historian first and concentrates on historical data.

They both, however, incorporate fiction with history, and as Michener's predecessor, Stone has accomplished much to pave the way for this artistic/historical form.

More summaries and resources for teaching or studying Lust for Life.

Lust for Life from Gale. ©2005-2006 Thomson Gale, a part of the Thomson Corporation. All rights reserved.