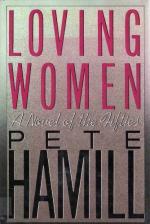 Books Like Loving Women: A Novel of the Fifties by Pete Hamill | Suggested Reading

Pete Hamill
This Study Guide consists of approximately 14 pages of chapter summaries, quotes, character analysis, themes, and more - everything you need to sharpen your knowledge of Loving Women.

This Michael Devlin, who recalls learning all he knows about Jews when he was the shabbos goy for the "old rabbi on 14th Street," is clearly the same Michael whose boyhood self Hamill created later in Snow in August (1997; see separate entry). Although the rowdy, lusty Michael of Loving Women seems different from the dreamy lad whose purity wins the day, they have the same intellectual curiosity and emotional bravery. Their backgrounds are the same, although this Michael's illiterate, somewhat narrow-minded father is a far cry from Tommy Devlin, in more ways than being alive, his mother is not Irish Kate, but a "ladderback" from the Bronx, and he has siblings.

More summaries and resources for teaching or studying Loving Women: A Novel of the Fifties.

Loving Women: A Novel of the Fifties from Gale. ©2005-2006 Thomson Gale, a part of the Thomson Corporation. All rights reserved.