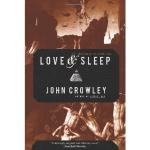 John Crowley
This Study Guide consists of approximately 8 pages of chapter summaries, quotes, character analysis, themes, and more - everything you need to sharpen your knowledge of Love & Sleep.

After leaving Noate University without completing his Ph.D. in history and Renaissance studies, Pierce secures a job in New York City teaching history and literature. Eventually, his unhappiness and failed relationships lead him out of New York and to Blackbury Jambs in the Faraway Hills of New York State. Here he meets Rosie Rasmussen and Rosie's uncle Boney Rasmussen whose foundation is the literary executor for Fellowes Kraft's estate.

Through these connections, Pierce's interest in alchemy and magic which originated in his reading of Kraft as a youth in Kentucky is brought full circle.

Pierce is tied closely to the Rasmussen family. Boney Rasmussen's foundation employs Pierce to transcribe Kraft's unpublished manuscript, and slowly a relationship is forming between Pierce, Rosie Rasmussen and her daughter Sam. Crowley has noted that the child has...

More summaries and resources for teaching or studying Love & Sleep.

Love & Sleep from Gale. ©2005-2006 Thomson Gale, a part of the Thomson Corporation. All rights reserved.