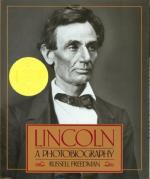 Freedman, Russell. "Newbery Medal Acceptance." Horn Book 64 (July/August 1988): 444-451. Freedman surveys the record for the awarding of the Newbery Medal for works of nonfiction and explains his own practices as a writer.

Horn Book 62 (January/February 1986): 27-32. Freedman defends nonfiction books as literature and describes his purposes and methods as a writer.

Nevins, Allan, and Irving Stone eds. Lincofn: A Contemporary Portrait. Garden City, NY: Doubleday, 1962. A collection of essays including "Lincoln's Ideas of Democracy" by Nevins and "Lincoln and the Art of the Word" by Marianne Moore.

Gates, Stephen B. Abraham Lincoln: The Man Behind the Myths. New York: Harper and Row, 1984. Gates attempts to present Lincoln the man, whose identity has been obscured for over a hundred years by myths.