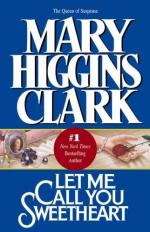 Let Me Call You Sweetheart Themes

Mary Higgins Clark
This Study Guide consists of approximately 14 pages of chapter summaries, quotes, character analysis, themes, and more - everything you need to sharpen your knowledge of Let Me Call You Sweetheart.

Let Me Call You Sweetheart Summary & Study Guide includes comprehensive information and analysis to help you understand the book. This study guide contains the following sections:

Preview of Let Me Call You Sweetheart Summary:

Underlying much of the novel is the idea of the healing power of love. Poor Reardon, imprisoned for a minimum of thirty years for a crime he did not commit, has his hope sustained in part by Beth, the woman he should have married.

For Kerry, it has been her daughter Robin's love and in turn her love for Robin that has helped her to cope with the feelings of anger and betrayal created by her divorce. Her commitment to Robin's welfare gives her stamina to endure hard work and disappointment. Her growing romance with Geoff Dorso uplifts her spirit and helps her to surmount the anguish of her divorce. When the full extent of Jonathan and Grace's betrayal of her is revealed, she not only has Robin's sustaining love, but Geoffs encouraging love to help her survive and move on.

Beauty is an idea that works its...

More summaries and resources for teaching or studying Let Me Call You Sweetheart.

Let Me Call You Sweetheart from Gale. ©2005-2006 Thomson Gale, a part of the Thomson Corporation. All rights reserved.