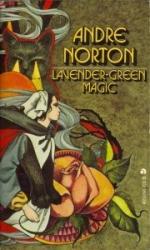 Andre Norton
This Study Guide consists of approximately 11 pages of chapter summaries, quotes, character analysis, themes, and more - everything you need to sharpen your knowledge of Lavender-Green Magic.

In the fantasy novel Lavender-Green Magic the three Wade children, Holly, Judy, and Crockett, must deal with the loss of their father, who is reported missing in action during the Vietnam War.

They move from their home in Boston to stay with grandparents they barely know, while their mother holds down a job at a nursing home. The novel deals with the children's fear, loneliness, and anger when faced with such drastic changes in their lives. The reactions of Holly, Judy, and Crockett are varied and believable, and as they confront their situation, they must learn to face the prospect of change and growth.

The conflicts they face become even more dramatic when they journey through a garden maze and travel back through time to the seventeenth century. During their magical adventures they meet Tamar and Hagar, sisters who are being persecuted for being witches.

More summaries and resources for teaching or studying Lavender-Green Magic.

Lavender-Green Magic from Gale. ©2005-2006 Thomson Gale, a part of the Thomson Corporation. All rights reserved.