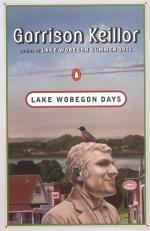 Garrison Keillor
This Study Guide consists of approximately 6 pages of chapter summaries, quotes, character analysis, themes, and more - everything you need to sharpen your knowledge of Lake Wobegon Days.

It seems clear that there is significant interaction between Keillor's radio program and his published fiction.

Many of the episodes of Lake Wobegon Days were broadcast before they appeared in print. Many were recorded and sold on cassette tape by Minnesota Public Radio. Keillor retold and elaborated some stories from the book after it was published. It may be accurate to say that the book is an adaptation of Keillor's oral presentations, because he selected from these and arranged them.

However, he also invented new material and elaborated upon the old. The interaction between Keillor's use of oral and print media is a complicated but important aspect of his creativity.

This interaction is also important for thinking about Keillor's audience, because readers who have heard his oral delivery may hear his voice when they read. It may be that the stories seem quite different in tone and even...

Lake Wobegon Days from Gale. ©2005-2006 Thomson Gale, a part of the Thomson Corporation. All rights reserved.