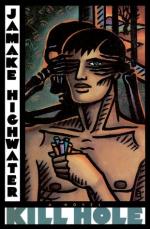 Jamake Highwater
This Study Guide consists of approximately 11 pages of chapter summaries, quotes, character analysis, themes, and more - everything you need to sharpen your knowledge of Kill Hole.

There is no doubt that part of Kill Hole is autobiographical. As Highwater stated in an interview in the November 8, 1992 issue of the St. Paul Pioneer Press, the novel is a "kind of semi-conscious effort to write my own litany."

He went on to say that it is a "layered book that can be read as a story that intends to imply a lot of other things."

With this as Highwater's purpose for writing the novel, it is not surprising that the book differs greatly from the other novels in the "Ghost Horse Cycle" in that it combines Native American traditions and modern European symbolic and impressionistic realism into a cultural hybrid novel of personal exploration and social criticism.

In a starred review in the September 12, 1992 issue of Library Journal, Janet Ingraham called Kill Hole an "unsettling portrayal of loss, misunderstanding, and a struggle for identity and purpose...

More summaries and resources for teaching or studying Kill Hole.

Kill Hole from Gale. ©2005-2006 Thomson Gale, a part of the Thomson Corporation. All rights reserved.