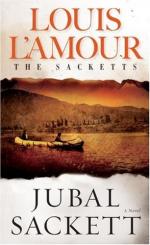 Louis L'Amour
This Study Guide consists of approximately 7 pages of chapter summaries, quotes, character analysis, themes, and more - everything you need to sharpen your knowledge of Jubal Sackett.

L'Amour's emphasis on the family in The Shadow Riders (1982) recurs in Jubal Sackett. Jubal's recollections of the family friend Sakim, the flashes he sees of the future and the presence he feels of other times and other lives reflect L'Amour's expanding interest in Middle Eastern philosophy (as previously displayed in Walking Drum, 1984) and psychic powers, a growing preoccupation of the American public since the 1970s. A more concrete social concern in Jubal Sackett is the problem of interfaith and interracial marriages — the main character marries an Indian princess/ priestess. L'Amour, however, dismisses the problem too simply when he has Jubal say "although our beliefs were not the same their roots were similar" and when Jubal assures Itchakomi that his family would approve of her.

More summaries and resources for teaching or studying Jubal Sackett.

Jubal Sackett from Gale. ©2005-2006 Thomson Gale, a part of the Thomson Corporation. All rights reserved.