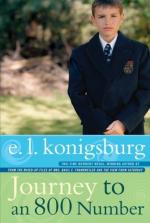 Journey to an 800 Number Social Sensitivity

Max, a precocious twelve-year-old whose parents were influenced by 1960s notions of communal living and "free love," encounters a variety of offbeat, earthy characters in his travels with his father. Some of the language and incidents in Journey to an 800 Number, which is told entirely from Max's perspective, may seem offensively realistic.

Konigsburg does not flinch from realistic dialogue in her attempt to convincingly and sensitively address the subject of a boy growing up in a fragmented society. The language of the children in the story is generally sophisticated and humorous but reflects the prevalence of vulgar slang in contemporary language.

Readers should be aware that Konigsburg occasionally uses expletives for characterization purposes.

Another sensitive issue arises when Max discovers that his mother, Sally, was pregnant and unmarried when she met Woody; he also learns that his mother has lied to him, telling him his grandparents...