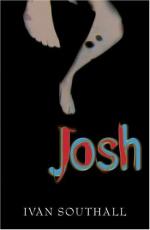 Ivan Southall
This Study Guide consists of approximately 14 pages of chapter summaries, quotes, character analysis, themes, and more - everything you need to sharpen your knowledge of Josh.

The main character, Josh Plowman, is a sensitive fourteen-year-old who has written poetry throughout his childhood and has won a prize for one of his poems, which was published in a Melbourne newspaper. Josh lives with his parents and his six-year-old sister, Caroline, in a suburb of Melbourne.

Josh has reminded his parents for several summers that all his cousins have visited Aunt Clara and that he should be allowed to do so also. His father objects, pointing out that Ryan Creek is a dull, dusty little country town where little happens. His mother cautions that Aunt Clara can be very strange and that he will not be able to run home if he does not enjoy his visit.

But Josh is eager to visit his father's family home.

The story opens late on a Saturday evening as he rides the train to Ryan...

More summaries and resources for teaching or studying Josh.

Josh from Gale. ©2005-2006 Thomson Gale, a part of the Thomson Corporation. All rights reserved.