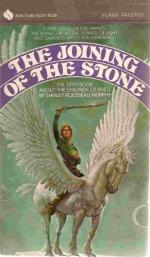 Shirley Rousseau Murphy
This Study Guide consists of approximately 12 pages of chapter summaries, quotes, character analysis, themes, and more - everything you need to sharpen your knowledge of The Joining of the Stone.

The Ring of Fire (1977) is the first of the five-book series about the Children of Ynell, who have telepathic powers that put them in danger of being kidnapped and drugged by the Kubalese.

A wise Seer named Anchorstar appears to Thorn and Zephy, who also have the Seer powers, and tells them to hunt for the lost runestone and to free the children who are captive. They rescue the children and escape with the aid of the winged horses of the gods.

The second book, The Wolf Bell (1979), introduces Ramad, who is the bastard son of Tayba. Ramad is given the wolf bell which enables him to rule the wolves, and soon he has many faithful friends and companions to help him on his quest for the runestone.

The Castle of Hape (1980) takes place twelve years after The Wolf Bell. Ram is captured by the enemy...

More summaries and resources for teaching or studying The Joining of the Stone.

The Joining of the Stone from Gale. ©2005-2006 Thomson Gale, a part of the Thomson Corporation. All rights reserved.