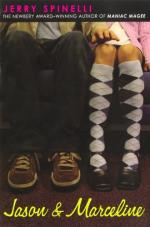 Jerry Spinelli
This Study Guide consists of approximately 9 pages of chapter summaries, quotes, character analysis, themes, and more - everything you need to sharpen your knowledge of Jason and Marceline.

This discussion of Spinelli's becoming a full-time writer and a writer of fiction for young adults does not mention Jason and Marceline, but its discussion of Space Station Seventh Grade casts some light on the sequel.

Spinelli, Jerry. "Newbery Medal Acceptance." Horn Book 67 (July-August 1991): 426-432. Spinelli reviews in general terms his career as a writer for young adults and the sources of his ideas for his works.

More summaries and resources for teaching or studying Jason and Marceline.

Jason and Marceline from Gale. ©2005-2006 Thomson Gale, a part of the Thomson Corporation. All rights reserved.