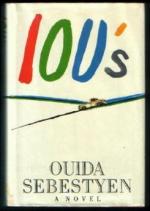 Ouida Sebestyen
This Study Guide consists of approximately 6 pages of chapter summaries, quotes, character analysis, themes, and more - everything you need to sharpen your knowledge of IOU's.

IOU's is a novel about how Stowe and Annie come to terms with their personal and family conflicts. The Garretts are a poor, hard-working mother and son who have a strong, loving relationship. Stowe's conflicts involve his dying grandfather's request to see him, but not Annie, and his inner struggle to be better to his mother than his father or grandfather. Annie's conflicts include her struggle to be an independent divorced parent and to resolve her differences with her father. Their plight is sympathetically portrayed as the novel describes the embarrassment of not having enough money at the grocery checkout, the excitement of the cave accident during the campout, Stowe's loss of his hundred dollar bill, the planning for the war on Karla, and the unexpected trip to Annie's hometown.

More summaries and resources for teaching or studying IOU's.

IOU's from Gale. ©2005-2006 Thomson Gale, a part of the Thomson Corporation. All rights reserved.