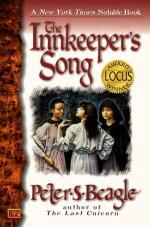 The Innkeeper's Song Topics for Discussion

Peter S. Beagle
This Study Guide consists of approximately 16 pages of chapter summaries, quotes, character analysis, themes, and more - everything you need to sharpen your knowledge of The Innkeeper's Song.

1. How do characters' attitudes toward Nyateneri change when they discover that she is actually Soukyan, a man?

How does this discovery shape later events?

2. Is Soukyan trustworthy? 3. Why is the novel titled The Innkeeper's Song rather than, say, Lal's Song or Tikat's Song or The Wizard's Song?

4. Why would Beagle characterize his novel as a"Song?"

5. Why does Karsh tell Rosseth about the young man's origins? Why not keep Rosseth ignorant of the facts?

6. Why does Beagle vary the verb tenses in "Lukassa," the chapter on death?

7. What sacrifice does the fox make? Was it worth it to him?

8. What was Arshadin's most crucial mistake? When did it occur? Was there any hope for saving him after he made it?

9. Which character grows the most during the narrative?

10. What do Karsh's "little boy's eyes" suggest about his character?

More summaries and resources for teaching or studying The Innkeeper's Song.

The Innkeeper's Song from Gale. ©2005-2006 Thomson Gale, a part of the Thomson Corporation. All rights reserved.