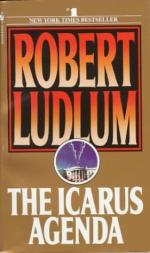 Preview of The Icarus Agenda Summary:

The principal theme of the novel is the danger posed to democracy by the ambitions of the few to rule the many.

One of the vice president's advisors actually employs the same terrorists who held the American embassy in Oman; he wants them to murder Evan Kendrick, the novel's main character and a potential rival for the vice presidency in the upcoming presidential election. Their effort to make themselves the hidden rulers of America causes the deaths of many innocent people. Plainly, if these advisors/businessmen were to actually gain control of...