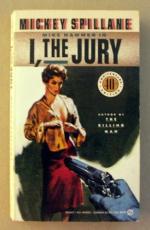 I, the Jury Themes

Mickey Spillane
This Study Guide consists of approximately 13 pages of chapter summaries, quotes, character analysis, themes, and more - everything you need to sharpen your knowledge of I, the Jury.

I, the Jury Summary & Study Guide includes comprehensive information and analysis to help you understand the book. This study guide contains the following sections:

This detailed literature summary also contains Related Titles on I, the Jury by Mickey Spillane.

Preview of I, the Jury Summary:

I, the Jury begins with the murder of Mike Hammer's best friend and fellow GI, Jack Williams, who died a slow and painful death with two bullets in the stomach. Mike vows vengeance for the death and announces that he will shoot the killer in the same painful way. So vengeance is the first and overriding theme announced in the novel. That Mike will have to work within, but also outside of, the normal boundaries of police procedure is also celebrated, and although he is cautioned by his other friend who is on the police force, Pat Chambers, to be careful about his vigilante actions, there is little restraint placed upon Mike's subsequent violent behavior.

As the narrative unfolds Mike discovers that Jack, who had himself joined the police force after his discharge, was investigating a drug operation run by a mysterious criminal mastermind.

More summaries and resources for teaching or studying I, the Jury.