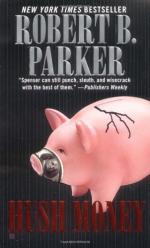 Robert B. Parker
This Study Guide consists of approximately 14 pages of chapter summaries, quotes, character analysis, themes, and more - everything you need to sharpen your knowledge of Hush Money.

An audiobook version of the novel is available, with the reliable Burt Reynolds providing interpretations of the characters.

Reynolds shows great variety in presenting the male characters, but his female characterizations, primarily Susan Silverman and K. C. Roth, seem to rely on rather breathy and whispery voices. But this cassette tape has the added value of being unabridged.

There is also the possibility of a film version being produced for cable, bringing back Joe Mantegna as Spenser, since the film version of Small Vices (1999), produced for a cable channel and starring Mantegna, has been regarded as somewhat successful.

More summaries and resources for teaching or studying Hush Money.

Hush Money from Gale. ©2005-2006 Thomson Gale, a part of the Thomson Corporation. All rights reserved.