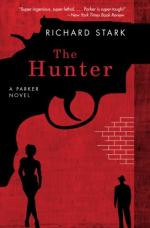 The Hunter Summary & Study Guide includes comprehensive information and analysis to help you understand the book. This study guide contains the following sections:

Preview of The Hunter Summary:

T he Hunter (also published as Point Blank!) and several others about the exploits of an armed-robbery specialist were reissued under the series title "The Violent World of Parker," which sets exactly the right tone for a discussion of their distinctive attributes.

Parker's world is not merely characterized by violence, it is founded upon violence: To an extent seldom found in even the hardest-boiled thrillers, it is the willingness as well as the ability to kill that separates the quick from the dead in these volumes.

In The Hunter, violence is used to force Parker's loving wife to attempt to murder her husband, which establishes the relative priorities of force and sentiment for the remainder of the series.

Subsequent books often place Parker in situations where love or trust is a tempting possibility, but his memory of his wife's treachery is always invoked as...