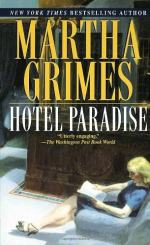 Martha Grimes
This Study Guide consists of approximately 11 pages of chapter summaries, quotes, character analysis, themes, and more - everything you need to sharpen your knowledge of Hotel Paradise.

Again, Hotel Paradise shares a LaPorte setting with Grimes's The End of the Pier (1992), a novel involving a serial killer and centering its attention on Sheriff Sam DeGheyn and waitress Maud Chadwick, both of whom turn up playing fairly minor roles in Hotel Paradise. Another similarity between the two works is the overarching theme of family relationships and an emphasis on a close study of character.

Of Grimes's many other mysteries, two have been especially recommended for younger audiences. The first, The Horse You Came in On (1992), brings Richard Jury and Melrose Plant to America to solve three apparently unrelated murders. The second, Biting the Moon (1999), features a teen-age girl who calls herself Andi; this novel highlights Grimes's growing commitment to the cause of animal rights.

More summaries and resources for teaching or studying Hotel Paradise.

Hotel Paradise from Gale. ©2005-2006 Thomson Gale, a part of the Thomson Corporation. All rights reserved.