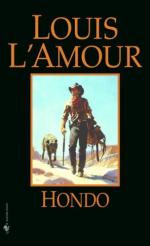 Louis L'Amour
This Study Guide consists of approximately 6 pages of chapter summaries, quotes, character analysis, themes, and more - everything you need to sharpen your knowledge of Hondo.

Hondo's characters are mainly stereotypes: the strong, proud Indian chief; the waiting and willing frontier woman; the worthless gambling husband; the hotheaded, revengeful Indian brave. In the character of Hondo, the independent yet lonely gunman, nevertheless, L'Amour introduces enough innovations to make Hondo perhaps the most memorable of L'Amour's many characters. One innovation is the aforementioned combining of freedomloving and home-building elements in Hondo's personality. Another is Hondo's mediation between the white and Apache worlds. Having lived with Indians, Hondo uses their methods to survive — traveling with his eyes always on the horizon, covering his tracks — to beat the Apaches at their game of silent, deadly warfare. Hondo values the Indian ability to live in harmony with the demands of the harsh Arizona desert but never abandons his own people and even serves as a scout for the cavalry, fighting marauding Indians.

More summaries and resources for teaching or studying Hondo.

Hondo from Gale. ©2005-2006 Thomson Gale, a part of the Thomson Corporation. All rights reserved.