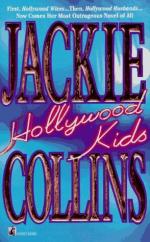 Collins's mainstream novel incorporates elements of romance, mystery, and crime. Books by Jacquelyn Suzanne and Rona Jaffe come to mind in the way the lives of characters are developed. Collins uses some of the same kinds of urgent ambition to drive the female characters and some of the dastardly qualities of the male chauvinist to pit her male characters against themselves and the females.

Echoes of Irving Wallace's The Fan Club (1975; see separate entry) are heard in the Ricca/Jordanna climax where sadistic hostage-taking and female spunk square off with victory going to the lesslikely adversary.