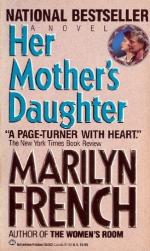 Marilyn French
This Study Guide consists of approximately 9 pages of chapter summaries, quotes, character analysis, themes, and more - everything you need to sharpen your knowledge of Her Mother's Daughter.

As in all of French's novels, the focus in Her Mother's Daughter is almost en tirely on women characters and women's lives. Unlike some of them, it does not necessarily demand to be read as a feminist tract. In fact, so much of its feminist message comes in Stacey's (the narrator's) voice, that one could question whether her's is the only explanation the reader should believe.

One provocative question the novel suggests is to what extent daughters repeat their mother's lives, and what happens when they determine not to.

"Family saga" novels with several generations of strong women characters might be brought into this discussion for a view from another angle.

How immigrant families acculturate and build a life in a new country is another possible topic. Novels such as Amy Tan's have contemporary parallels to Frances's and Belle's experiences earlier in the century.

More summaries and resources for teaching or studying Her Mother's Daughter.

Her Mother's Daughter from Gale. ©2005-2006 Thomson Gale, a part of the Thomson Corporation. All rights reserved.