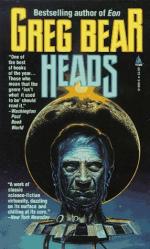 Greg Bear
This Study Guide consists of approximately 17 pages of chapter summaries, quotes, character analysis, themes, and more - everything you need to sharpen your knowledge of Heads.

Mickey Sandoval, the narrator of Heads, is blunt about the novel's themes. He says, "Order and cold, heat and politics. The imposition of wrong order: anger, fear, death, suicide and destruction." This is a succinct statement of the themes of this tale of scientific adventure, all of which are played out with Shakespearean grandeur.

The notion of "wrong order" is a notably interesting theme. The reader might expect that order would always be good, a positive force in opposition to disorder, or chaos, a negative or bad force. Instead, Heads calls attention to different kinds of order, implying that there are differences between them and that disorder may sometimes be good.

The Logologists carry the burden of "wrong order" in Heads. Their name implies logic, an orderly way of looking at the universe.

In fact, they want order to be their order.

More summaries and resources for teaching or studying Heads.

Heads from Gale. ©2005-2006 Thomson Gale, a part of the Thomson Corporation. All rights reserved.