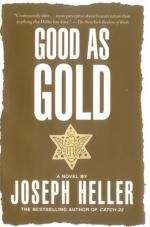 Joseph Heller
This Study Guide consists of approximately 8 pages of chapter summaries, quotes, character analysis, themes, and more - everything you need to sharpen your knowledge of Good as Gold.

The protagonist of Good as Gold, Dr.

Bruce Gold, is a forty-eight-year-old English professor with political aspirations.

Not public-minded in the least, Gold cultivates a self-serving shiftiness in his stance on issues. He is opposed both to segregation and integration, to sexual and racial discrimination, and to equal rights amendments. As Heller observes, Gold could "deliver essentially the same speech to an elderly reactionary religious group that he had given the day before with equal success to a congress of teen-aged Maoists." Power and fame are Dr. Gold's goals, with the possible added benefit of gaining the beautiful, blonde Andrea Conover as his new wife.

However, Gold has a problem that thwarts his fulfilling his dreams: He is a Jew. Ambivalent about his heritage, Gold seeks acceptance among the privileged WASPS of Washington, yet he cannot escape reminders of his Jewishness—from his stifling family connections, to...

More summaries and resources for teaching or studying Good as Gold.

Good as Gold from Gale. ©2005-2006 Thomson Gale, a part of the Thomson Corporation. All rights reserved.