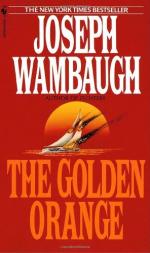 Books Like The Golden Orange by Joseph Wambaugh | Suggested Reading

Joseph Wambaugh
This Study Guide consists of approximately 5 pages of chapter summaries, quotes, character analysis, themes, and more - everything you need to sharpen your knowledge of The Golden Orange.

The Golden Orange (1990), Wambaugh's novel after five years of not publishing, shares with his nonfiction works on crime the conviction that criminals have sociopathic personalities that are incurable. He reminds us of the viciousness of these criminals in a scene in which a tape of a tortured child's screams is played. The murderer made the tape for his own enjoyment.

The California setting is familiar from Wambaugh's previous works; The Golden Orange is not set in a slum or a ghetto, however, but in one of the wealthiest communities in America.

Life here is very different from English middle-class life portrayed in his work of nonfiction The Blooding (1989), but it seems just as authentic.

Unlike Wambaugh's earlier books, The Golden Orange deals with the difficulties inherent in every person's life, not just those of police officers. In Wambaugh's late twentieth-century America, it is difficult just to...

More summaries and resources for teaching or studying The Golden Orange.

The Golden Orange from Gale. ©2005-2006 Thomson Gale, a part of the Thomson Corporation. All rights reserved.