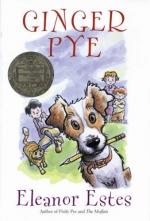 Eleanor Estes
This Study Guide consists of approximately 10 pages of chapter summaries, quotes, character analysis, themes, and more - everything you need to sharpen your knowledge of Ginger Pye.

Ginger Pye contains no overt violence, but the author knows her audience well enough to address an aspect of life that ordinarily fascinates children. For example, Gracie the Cat has a habit of ripping open the stomachs of her prey if the Pyes' reactions to her catches are not sufficiently effusive. The children shudder at the story of Bit-Nose Ned, whose nose was bitten off by a dog and had to be surgically reattached. None of these anecdotes is described graphically, but Estes' concern obviously lies in depicting a realistic children's world rather than in whitewashing a story. At the close of the book, Ginger's suffering at the hands of his abductors is alluded to but not overemphasized; excitement about his escape and the joy of his reunion with the Pyes balance the reader's sympathy for his suffering.

More summaries and resources for teaching or studying Ginger Pye.

Ginger Pye from Gale. ©2005-2006 Thomson Gale, a part of the Thomson Corporation. All rights reserved.