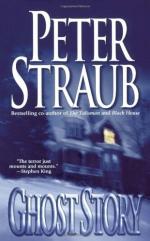 Peter Straub
This Study Guide consists of approximately 7 pages of chapter summaries, quotes, character analysis, themes, and more - everything you need to sharpen your knowledge of Ghost Story.

A major motion picture version of Ghost Story was released by Universal in 1981. It starred Fred Astaire, Melvyn Douglas, Douglas Fairbanks, Jr., John Houseman, Patricia Neal, and Alice Krige. John Irvin directed the film, for which Lawrence D. Cohen wrote the screenplay. Despite an excellent cast, the film was not successful with critics and audiences. The screenplay greatly simplifies the novel's plot and relies on many of the cliches of the horror genre rather than suggesting the fresh use which Straub makes of familiar material.

Mia Farrow and Keir Dullea starred in a 1976 Paramount version of Julia, which was titled The Haunting of Julia (originally titled Full Circle). Like the film based on Ghost Story, it was not well received.

More summaries and resources for teaching or studying Ghost Story.

Ghost Story from Gale. ©2005-2006 Thomson Gale, a part of the Thomson Corporation. All rights reserved.