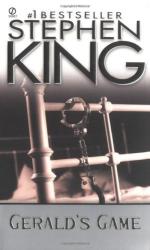 Stephen King
This Study Guide consists of approximately 9 pages of chapter summaries, quotes, character analysis, themes, and more - everything you need to sharpen your knowledge of Gerald's Game.

King confessed that his characterization of women in his novels has been less than three-dimensional. However, Gerald's Game initiates a series of books about women, violence and survival, including Dolores Claiborne and Rose Madder. Critics have complained that this novel is too politically didactic, as Jessie's voices sound like radical (meaning bitchy) feminists. Yet few have pointed out the variety and scope of King's examination of the psychological, social and emotional interior landscape of women. Others dislike the details of Jessie's molestation by her father or King's explanation of Joubert's hideous history. Clearly, this uneven and complex novel provides many avenues for discussion.

1. What metaphors and principles of feminism does King explore and elaborate? How does this "date" the novel?

2. How do the characters of Joubert, Gerald and Tom Mahout represent the liabilities of traditional definitions of masculinity?

More summaries and resources for teaching or studying Gerald's Game.

Gerald's Game from Gale. ©2005-2006 Thomson Gale, a part of the Thomson Corporation. All rights reserved.