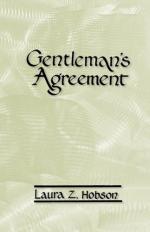 Laura Z. Hobson
This Study Guide consists of approximately 6 pages of chapter summaries, quotes, character analysis, themes, and more - everything you need to sharpen your knowledge of Gentleman's Agreement.

Phil Green could easily be the man next door, the typical American, unaware of many of the problems in his society. In order to carry out a newspaper assignment about Jewish life in America, he pretends to be Jewish. As a result of his newly assumed identity, he realizes that discrimination is more far-reaching than he ever suspected.

Lonely after his wife's death, he becomes romantically linked with Kathy, a divorcee, whose resentment of his work surfaces when she has to adjust to his various aliases. While trying to convince Green that she is really not bigoted, she begins to display the characteristics of a latent bigot.

As he continues his research, Green discovers that a surprising number of the people around him, including his family and friends, harbor deep prejudices. As a result of this discovery, his newspaper story emerges even more powerfully than he anticipated.

More summaries and resources for teaching or studying Gentleman's Agreement.

Gentleman's Agreement from Gale. ©2005-2006 Thomson Gale, a part of the Thomson Corporation. All rights reserved.