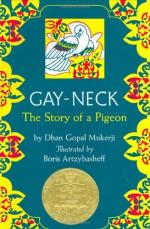 Gay-Neck: The Story of a Pigeon Social Sensitivity

Dhan Gopal Mukerji
This Study Guide consists of approximately 9 pages of chapter summaries, quotes, character analysis, themes, and more - everything you need to sharpen your knowledge of Gay-Neck.

Perhaps India's reputation as a culture permeated by religion is not completely deserved. Still, there is a vast difference between American beliefs and the religious attitudes of this country where the recognized religious heritage is so ancient and complex. The reader is confronted with the many cultural differences of India and their effects on the people. For example, at one point it is explained that Hindus cremate their dead, while Muslims bury them. As a result, there are Muslim cemeteries to commemorate their participation in the war, but for the Hindus there are no such memorials. Mukerji explains that for the Hindus "no place is marked or burdened with their memory."

More summaries and resources for teaching or studying Gay-Neck: The Story of a Pigeon.

Gay-Neck: The Story of a Pigeon from Gale. ©2005-2006 Thomson Gale, a part of the Thomson Corporation. All rights reserved.