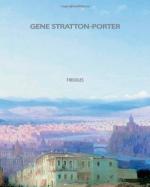 Gene Stratton Porter
This Study Guide consists of approximately 6 pages of chapter summaries, quotes, character analysis, themes, and more - everything you need to sharpen your knowledge of Freckles.

Porter's love of nature is evident; contact with nature brings out the best in her characters. McLean has recognized the swamp's superiority to the city and renounced his family's mercantile business to become a lumberman. Their studies in the swamp make the Bird Woman and the Swamp Angel compassionate and relatively uninhibited by artificial social conventions. For Freckles, the Limberlost provides both an education and a test of character.

Even Black Jack is more courageous and less evil than his fellow outlaws as a result of his lifetime in the swamp.

Because of its positive influence, Porter suggests that the Limberlost should be cherished and preserved.

Freckles is a novel in the Horatio Alger tradition. A boy of unknown parentage demonstrates superlative virtue, winning influential friends through whose concern his family background is investigated and he is identified as the long-lost nephew of an Irish nobleman. Thus Freckles...

More summaries and resources for teaching or studying Freckles.

Freckles from Gale. ©2005-2006 Thomson Gale, a part of the Thomson Corporation. All rights reserved.