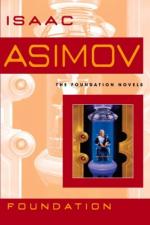 Isaac Asimov
This Study Guide consists of approximately 9 pages of chapter summaries, quotes, character analysis, themes, and more - everything you need to sharpen your knowledge of The Foundation Trilogy.

Preview of The Foundation Trilogy Summary:

The Foundation Trilogy consists of three books of stories—Foundation, Foundation and Empire, and Second Foundation—that form a history of the future. The events in the trilogy are loosely based on the fall of the Roman Empire, but the trilogy is also about the nature of history itself. The books have a strong narrative line, one that is familiar to many readers but presented in a fictional form. In Asimov's work, the Roman Empire becomes the Galactic Empire, and a sophisticated new science known as psychohistory allows people to predict future events. Within this framework, the trilogy explores such issues as the accurate determining of historical trends, the conflict between determinism and free will, and the ability of one person or group of people to control history.

More summaries and resources for teaching or studying The Foundation Trilogy.

The Foundation Trilogy from Gale. ©2005-2006 Thomson Gale, a part of the Thomson Corporation. All rights reserved.